VIPERS: A look halfway back in the life of the Universe

What did the Universe look like 7 billion years ago?  VIPERS (the VIMOS Public Extragalactic Redshift Survey) is mapping the distribution of galaxies at redshift 1, an epoch when the Universe was half its present age.  VIPERS is an ESO large project with an international team led by DarkLight investigator Luigi Guzzo. 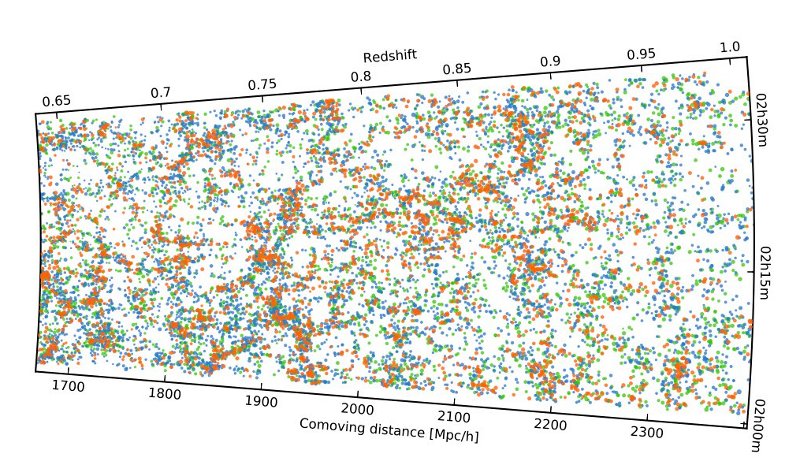 Galaxies are organised into a cosmic web of structures including dense clusters, long filaments and walls surrounding large empty voids. The patterns have been beautifully visualised in computer simulations and have been observed in the nearby Universe. Now VIPERS is showing us these structures at an earlier epoch.  In this map showing a subset of VIPERS, each point represents an observed galaxy.  The colours represent the true galaxy colours.  The reddest galaxies tend to inhabit the densest clusters.

VIPERS observes a critical period in cosmic history when dark energy started to become important.  Dark energy pushes against the pull of gravity causing the expansion of the Universe to accelerate. Could the two forces be deeply related? The VIPERS team is investigating the nature of dark energy and gravity by measuring the balance between gravitational attraction and expansion with cosmic time.

VIPERS is also providing us with a new look at the processes of galaxy formation and evolution (the ageing process). Early in their lives, galaxies tend to be hot with star formation. Young, massive stars have blue colours, but the stars burn out with time leaving behind cooler red stars. The life cycle depends importantly upon the environment of the galaxy, whether it is a member of a cluster with close neighbours or more isolated. VIPERS is giving the strongest constraints yet on the lives of galaxies at early epochs with precise measurements of the stellar mass, colours and the mass density. The relationship between the galaxies that we see and the underlying dark matter is a difficult problem in cosmology and the VIPERS sample is providing new clues.