A confirmation of the cooling power of voids 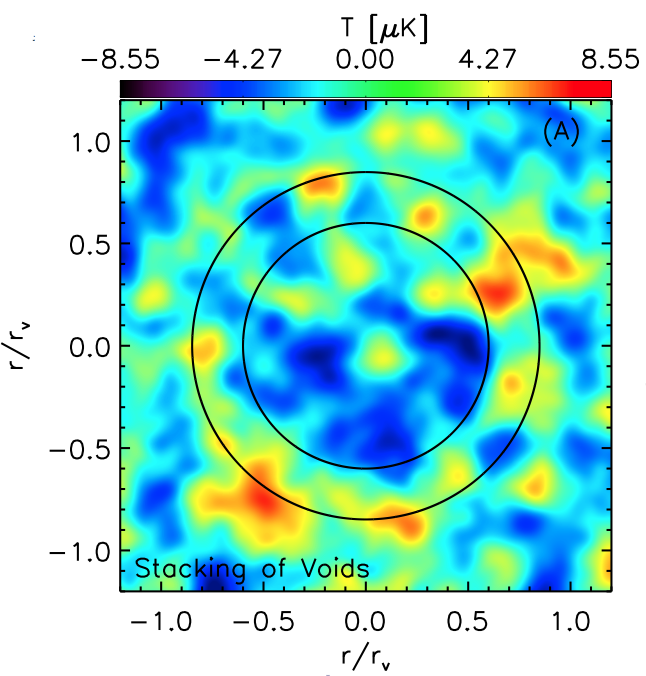 A stack of 776 microwave background patches corresponding to cosmic voids. A cold spot is seen suggesting that the photons are cooled by voids. The temperature scale is in microkelvin. Figure courtesy of Cai et al 2013.

The standard cosmological model predicts that photons will heat up slightly while crossing the strong gravitational potential of a massive cluster of galaxies. Conversely, while crossing a void – a region of space empty of galaxies – photons will cool down. On large scales of hundreds of megaparsecs the effect is due to the accelerating expansion rate of space and is known as the integrated Sachs-Wolfe effect.

Yesterday, in a preprint posted on arxiv.org, Cai and collaborators report direct observations of the cooling effect of voids using photons from the cosmic microwave background. The change in temperature due to a single void is too small to measure, but the team has combined the signal from hundreds of voids identified in the Sloan Digital Sky Survey to build a convincing case.

Cai and team find that voids are many times colder than expected, perhaps pointing to a discrepancy with our cosmological model.  This new measurement may help explain a prior study by Granett, Neyrinck and Szapudi in 2008 that used a smaller sample of voids but found a larger-than-expected signal.

But the results are not free from controversy. Independently, Ilic and collaborators released a study the same week and find no significant signal. The statistical methods used by the two groups differ however, which can make all the difference.  Finally the study of cosmic voids is heating up.